Before being re-branded as the Red Bulls, New York was home to the Metrostars. For nearly a decade, the New York club competed as one of the original teams from the MLS’ inaugural season. The MetroStars’ kits featured the classic pinstripe design alternating between red for the Home shirts and white for Away. Tracking down these kits might be a little difficult, but they still pop up from time to time.

One of the original Home kits for the New York MetroStars featured thick red and black stripes with thin white stripes. You’ll also find white around the collar to match the rest of the design. The beautiful MetroStars logo is centered on the front of the shirt and you’ll find this throughout.

Much like the Home version from the 1997 season, the Away kit also sports bold stripes with thinner red stripes. The yellow logo pops perfectly against the white base in true 90’s fashion.

For the following season, the MetroStars switched things up with much thinner stripes and frankly looks even more impressive. Black and yellow stripes combine on top of the red base of this Home shirt. The white on the collar around the collar is kept in tact as well.

The MetroStars’ 1998 Away kit is quite possibly the most desirable shirt of the bunch. Switching from yellow to orange, the stripes of the shirt shirt really do standout better than any others. Once again, white trim has been placed around the collar to match the Home shirt.

One of the final shirts featured in our list here is the MetroStars’ Home kit from 2000. It consisted of more of a basic template design ditching the white on the stripes and leaving them for the sleeves and collar. 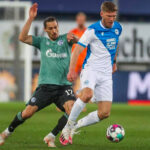 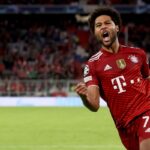